The musical comedy tells the story of Wednesday Addams falling in love with an ordinary young man, forcing her father to keep the terrible secret from her mother, the macabre Morticia. All goes well, until one fateful night when the families are brought together at a dinner party.

Thomas Kilroy took the lead in breath-taking fashion as Gomez, Wednesday’s father. The main characters were supported by a fabulous group of performers, dancers and even a 5ft moon.

The cast were supported by a dedicated technical team of staff and students, with student Joe Pilling designing the lighting set. The musicians worked tirelessly on a professional standard score and provided outstanding accompaniment to underscore the drama.

Students from across all subjects took part in the show, ensuring it was a cross-curricular production.

Michelle Colville, head of Performing Arts at the college said, “The Addams Family will be a treasured memory of many students’ time at New College. Performing arts offer so much to students in terms of building confidence, encouraging teamwork and giving them opportunities that they have not had before. The students worked really hard, rehearsing in their free time and on Sundays to ensure a professional standard performance.”

Richard Fletcher, Principal of New College, said “An absolutely fantastic performance enjoyed by all!  The actors and actresses, the band, the technicians and the teachers all contributed to an epic show.  It is really good to see students enjoying themselves and showcasing their talents outside of the classroom, contributing to an outstanding student experience.” 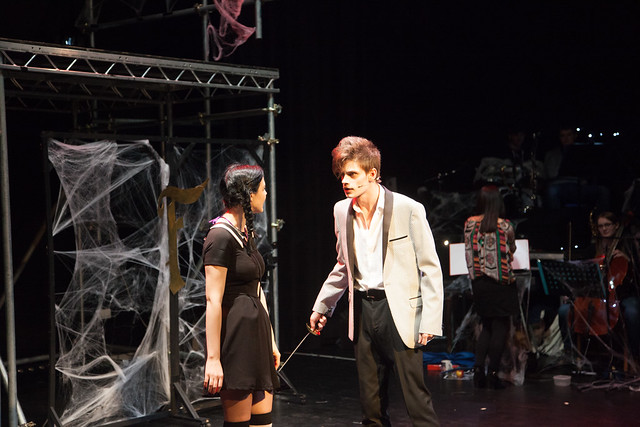